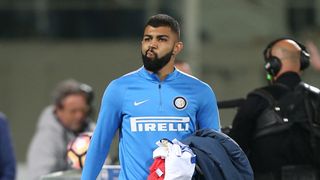 Gabriel Barbosa has apologised to Inter fans and his team-mates after he petulantly left the dugout after being an unused substitute against Lazio.

After caretaker boss Stefano Vecchi made his third change late on in a 3-1 win at the Stadio Olimpico on Sunday, Gabriel showed his disdain by walking down the tunnel before the final whistle.

Vecchi said afterwards he expected the club to take action against the 20-year-old Brazilian, who has asked for forgiveness for his impetuous act.

Gabriel wrote on Facebook: "Inter fans and team-mates, yesterday during the Lazio vs Inter game I suddenly had a thoughtless and unacceptable attitude when leaving the field before the end of the game.

"After the heat of the game passed, calmly and with the support of my family, I saw that this was unsporting and went against my professional values.

"I acknowledge my mistake and would like to offer my since apologise to all the Nerazzurri fans who have always supported me and my team-mates."

Gabriel, known as Gabigol following his prolific goalscoring in the famed youth academy of Santos, arrived at Inter in August amid high expectations following a deal reported to be worth €25 million.

However, the Brazil international started one match all season – a 3-2 victory over Bologna in the Coppa Italia in January – and featured in Serie A as a substitute just nine times.

It has been suggested Gabriel could be sent out on loan after a disappointing debut campaign in Italy.