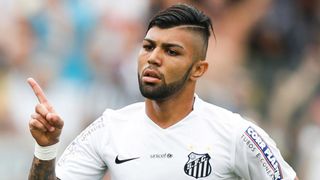 Gabriel Barbosa has distanced himself from claims he is set to sign a new contract at Santos, admitting he has offers from elsewhere.

Brazil international Gabriel has been the subject of numerous links to other clubs, with Borussia Dortmund and Paris Saint-Germain credited with an interest.

Chelsea and Juventus have more recently reportedly stepped up their attempts to sign the 19-year-old striker.

Santos claimed last week that Gabriel had agreed to extend his contract by two years until 2021, but the player insists there is nothing concrete between himself and the club.

"No, there is still no agreement. The president ended up talking, but there is nothing confirmed," said Gabriel after scoring in Santos' 1-1 draw with Palmeiras on Tuesday.

"We are just talking. My parents and my representatives are talking. They have some things to discuss.

"I have proposals, too, but there's nothing confirmed yet.

"I need to talk with my parents and my representatives. We are talking and we are going to resolve it slowly."

Gabriel will be part of the Brazil squad as they look to claim the nation's first gold medal in men's football at Rio 2016.