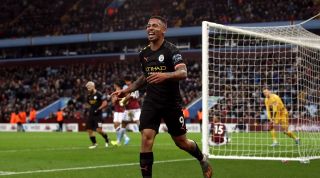 Gabriel Jesus believes Manchester City is still the best place for him to be.

The Brazil international has had to play second fiddle to Sergio Aguero for the majority of his three years at the Etihad Stadium.

Jesus has scored 61 goals in 131 appearances for Pep Guardiola's side, although he has never started more than half of City's Premier League games in a season.

Nevertheless, the former Palmeiras man insists he is at the right club for his development.

"I feel this is the best place for me to develop, if not I wouldn't have come," he told City's official website.

"Of course I trust in the club when I took the decision to come here.

Jesus scored a brace in the 4-0 thrashing of Fulham in the fourth round of the FA Cup on Sunday.

"I am happy!” he said of his most recent display. “We won the game, qualified for the next round and when I score, of course, I am even happier! We played well."

Jesus will hope to keep his place for the visit of Manchester United in the League Cup semi-final second leg on Wednesday.

"The first game [a 3-1 victory at Old Trafford] was very good for us,” Jesus added. “But this is a new game. We have to forget that. The game on Wednesday will be a tough game. I hope we can play well again and qualify.”

City return to Premier League action with a trip to the Tottenham Hotspur Stadium to face Jose Mourinho's men on Sunday.