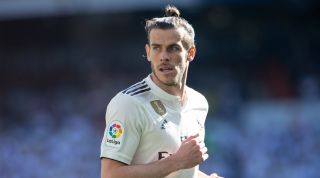 Real Madrid are willing to sell Gareth Bale this summer, according to the Daily Mail.

Zinedine Zidane has held a face-to-face meeting with the Wales international and informed him that he is not in his plans for next season.

Bale has endured a frustrating season at the Bernabeu and has even been booed by his own supporters on several occasions.

However, the former Tottenham man is adamant that he does not want to leave the La Liga giants.

The 29-year-old is contracted at Madrid until 2022 and intends to stay put despite his difficult relationship with Zidane.

Manchester United have been long-term admirers of Bale and may make a move for the Welshman in the coming months.

The forward could be available for a cut-price fee as Madrid look to raise funds for their own summer spending spree.

However, United's failure to qualify for the Champions League could damage their chances of landing a player who has won six major trophies in the Spanish capital.

Why Maurizio Sarri could become Chelsea’s most successful failure