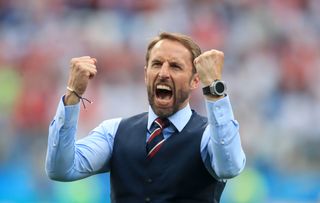 England manager Gareth Southgate expects his side to be in a better position to try and win next summer’s European Championships.

Euro 2020, which was due to be begin on Tuesday, was moved back 12 months because of the coronavirus pandemic.

Southgate, who had fitness doubts over Harry Kane and Marcus Rashford before the tournament was moved, believes an extra year of preparation for his young players could work in their favour.

“At one point we were possibly looking at being without Marcus Rashford and Harry Kane, or at the very best both of those not having a lot of football,” Southgate said on Sky Sports’ Football Show.

“Maybe some of those things will be better in a year’s time, but other teams will be in the same. I’m looking at the German league and people like (Kai) Havertz playing and their young players are going to develop as well.

“Difficult to predict, the age of the team you would hope would be better in a year’s time but we have to go and prove that on the pitch.”

If the tournament remains in the same format, England will play all of their group games at Wembley and then the semi-final and final if they get that far.

Southgate, who has experience of playing in a home tournament, hopes his side can use that to their advantage.

“If the tournament is in the same format as was proposed for this year, and we don’t know that every city will be able to host, that is something that seems to be decided, we have an advantage in our group matches,” he said.

“But so do Italy, who play their games in Rome, Spain play in Bilbao, Holland play in Amsterdam. It’s only a true advantage in the latter stages of the competition, semi-final, final, if we are good enough to get to that point. But without doubt we have to view it positively.”

Southgate, who took over from Sam Allardyce in 2016, is contracted to his role until after the 2022 World Cup in Qatar, but has hinted he would like to carry on beyond that tournament, citing “plenty of challenges” left.

“Usually that is not your choice as a manager. It helps if you don’t have a game for 11 months so you can stay unbeaten,” he joked.

“Difficult to predict, the age of the team you would hope would be better in a year’s time but we have to go and prove that on the pitch.”

“Let’s see. When you’re in this role, you have to keep winning matches, just because we had a good couple of years…

“The next step we have to go and perform, you always have to do that as an international team. I am hungry to take the team further, we have got to find that edge that the likes of France and Portugal have.

“We have a team that plays good football, now in those big moments we have to find that gnarly, winner’s mentality that makes the difference in the biggest game.

“I have got to do that as a coach. There are plenty of challenges ahead of us for England.”

His success in the role has seen him linked with a return to club management on a number of occasions over the last 18 months, with Tottenham and Manchester United among his reported suitors.

He admits he would one day like to have another crack at Premier League management, having had a spell at Middlesbrough, but not in the immediate future.

“I am not going to be England manager for 20 years,” he said. “I would like to coach and manage for a reasonable period, I don’t know how long exactly.

“At some point that decision will be ahead of me, I don’t see it in the near future. I had one crack at club management where I was nowhere near prepared.

“When you have been manager of England, you are not going to have a more pressurised role. Of course I am ambitious, but at the moment there is nothing in my mind other than making England a success.”