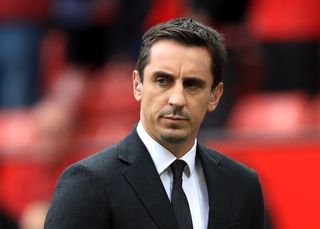 Gary Neville is concerned about a looming financial “nightmare” for English Football League clubs while Stevenage have hit out at plans to follow through with relegation if the season is decided off the pitch.

Huddersfield owner Phil Hodgkinson told the BBC over the weekend that around “50 or 60” clubs were in danger of going bust if supporters were not allowed to attend fixtures next season.

While Neville disputes the number put forward, the former Manchester United and England full-back believes the EFL will need investment down the line to keep clubs solvent.

“It will be July, August, September, October where the real pressure comes,” Neville said on The Football Show on Sky Sports.

“I do think there will be clubs considering going into administration in the next three to four months, basically just to save themselves.

“Everybody’s looking down at their own feet and they’re not seeing the carnage that’s coming economically in the next three to four months.

“What the Huddersfield owner says is quite alarming. I do think there is a looming nightmare economically for the EFL clubs, quite a few of them. Whether it’s up to 60 I’m not sure.

“Football does need at the EFL level some funding from somewhere in the next four, five or six months or else we will see sides go into administration, that would be a real shame.”

Stevenage have become the latest club to criticise the EFL, which last week indicated that teams in the Championship, League One and League Two will still be promoted and relegated even if their seasons are ended early.

League Two clubs earlier this month voted to end their campaign immediately without relegation but the EFL disagrees and a points per game system put forward would see Stevenage drop down to the National League.

Stevenage chairman Phil Wallace said on his club’s website:  “There is absolutely no integrity whatsoever in using a mathematical formula to expel a club from the EFL. That is unjust and wholly wrong.

“There is no integrity in the EFL Board ignoring the overwhelming vote by League Two clubs that told them they didn’t want to see any expulsion from the EFL by a points per game formula.

“As the rules stand, we should play it or void it. We can introduce a rule change for PPG for promotion and play-offs, I have no problem with that but it’s wholly wrong if that artificial formula is then used to relegate a club that has a reasonable chance of surviving by playing.

“That is a completely different, and unacceptable, step to take. There is a simple solution with integrity – bring more teams into the EFL from the National League to increase the product.

“Since the National League season wasn’t completed in the way it was intended, one option is to leave League Two as it is, with no relegation, and promote one club from the NL this season instead of two, to bring the EFL back to 72 teams, but with three up, three down established and in place for next season.

“No lawsuits, no clubs bankrupted and something created for the National League that appears to be impossible to achieve.”

Championship clubs are set to return to training on Monday as they tentatively begin steps towards resuming their season next month.

West Brom have followed Leeds – the clubs occupy the top two spots in the division – to say they want the campaign to be finished on the pitch if it can be done safely.

Chief executive Mark Jenkins said on the Baggies’ website: “The club is resolutely behind finishing the campaign, if it is at all possible, where it belongs and that is on the pitch.

“From the moment that the path was cleared for the players to return to training, albeit in a regulated and strictly-controlled format, our mindset has been focused solely on being in the best possible shape, physically and mentally, to complete the remaining nine league fixtures.”

Formal votes on whether divisions will play on or curtail their seasons are not expected until next week.

The EFL board will review feedback from clubs to its proposed framework for curtailment when it gathers on Wednesday. Based on that, a final framework is set to be put to clubs for a vote at an EGM, after which the divisional votes can take place if the framework is approved.