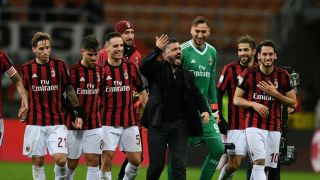 Milan were failing to reach their potential earlier in the campaign after plenty of pre-season investment, the club bringing in the likes of Leonardo Bonucci, Hakan Calhanoglu and Andre Silva.

Montella was sacked in November with Gattuso stepping up from the youth team to lead the fallen giants.

It took him a while to get some consistency in Milan's displays, but since the turn of the year they have been one of the form teams in Serie A and are closing in on a European place.

Milan are now unbeaten in 13 matches in all competitions as they prepare to face Arsenal in the Europa League last 16, and Shevchenko says it is all down to Gattuso.

"He gave them their identity back, as well as a sense of belonging. He wants his players to be competitive and aggressive: he was like that as a player, so I'm not surprised.

"He's someone who won't give up even a millimetre. Rino's not afraid of anything, he's been given his chance and he's taking advantage of it.

"I hope he takes Milan to the Champions League next season, even if a derby between Dynamo Kiev and Milan wouldn't be easy for me."