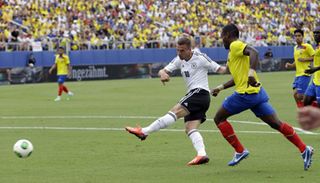 The Arsenal striker netted after only nine seconds as the Germans once again showed their impressive strength in depth.

Davide Gualtieri's goal after 8.3 seconds for San Marino against England in 1993 is considered by FIFA to be the fastest goal in a World Cup match.

Germany were 2-0 up after just three minutes when Sidney Sam picked out Lars Bender's run and the midfielder, with no defender near him, strolled through a hole in the back four and fired home.

In the 17th minute, Max Kruse broke down the left and pulled the ball inside for Podolski to blast in number three and it was 4-0 after only 24 minutes when Roman Neustadter fed Bender whose low shot sneaked past Ecuador keeper Maximo Banguera.

Just before half-time Ecuador pulled a goal back through Manchester United winger Antonio Valencia and they made the score more respectable with another after 84 minutes from a curling free-kick by captain Walter Ayovi.

In between, Germany keeper Rene Adler pulled off a superb double save in the 58th minute to keep out another blast from Valencia and the follow-up from Jefferson Montero.

Germany play the second game of their tour against Jurgen Klinsmann's United States in Washington on Sunday.