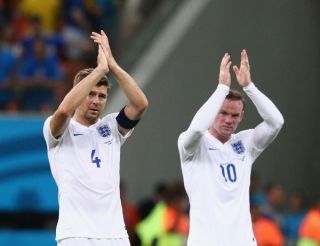 Gerrard stepped down as captain and retired from international football after England's group-stage elimination at the World Cup.

The Liverpool skipper led England in their last three major tournaments, but is confident Rooney is the best choice to replace him.

Since making his debut as a 17-year-old in February 2003, Rooney has scored 40 goals in 95 games for his country, and has twice before been named captain for friendly games.

Louis van Gaal saw fit to name Rooney as his captain at Manchester United after taking over recently, and Gerrard has now called on Roy Hodgson to follow suit and give the striker the national armband.

He wrote in the Daily Mail: "As far as I am concerned, there is no more worthy candidate to take over.

"Roy has tremendous faith in Wayne. When the Manchester United striker was under pressure in the summer, when there was increased speculation about his place in the England team, his manager stuck by him and played him in the games that mattered. It was a big show of respect.

"So why do I think Wayne is the No 1 choice? For starters, he is a natural leader. Aside from being a top player, one who commands respect within the group, Wayne is passionate about representing his country and won't be fazed by the responsibility.

"Before a game, he is one of the most vocal players in the dressing room. He wouldn't be afraid of speaking up and talking to someone one-to-one, telling them what is expected.

"I also believe it is important for an England captain to lead his club. Everything that compelled Louis van Gaal to make Wayne United captain after working with him for six weeks are the qualities that Roy has seen at every get-together for the past two years."

Only three players have scored more England goals than Rooney, who sits nine off Bobby CHarlton's record haul of 49.

Gerrard hopes added responsibility will bring the best out of Rooney - who scored his first goal at a World Cup finals in his 10th game against Uruguay in Brazil.

"I couldn't wait to walk into the dressing room after Roy gave me the news, and it will be the same for Wayne," Gerrard added.

"He will be desperate to get to Wembley for the Norway friendly [on September 3] and the added responsibility could be the catalyst to go on and break Sir Bobby Charlton's record of 49 goals.

"Everything is there for him now. He is set to be captain and the next two tournaments, in France and Russia, are the most important he'll play in — they can define his legacy."