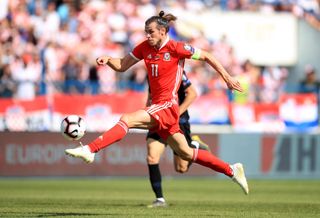 Ryan Giggs says Gareth Bale has shaken off his end-of-season rust and is ready to finish the campaign on a high with Wales.

Giggs’ side meet Hungary in Budapest on Tuesday, with precious Euro 2020 qualifying points at stake.

Wales hope to claw back the three-point deficit on Group E leaders Hungary and are looking to captain Bale to end his goal drought at the Groupama Arena.

The Real Madrid star has gone three months without a goal for club and country, and has suffered huge frustration in Spain after losing his first-team place towards the end of the season.

“I was happy with Gareth’s performance in Croatia,” Giggs said of the 2-1 defeat in Osijek on Saturday which dropped Wales to third place in the group.

“He had a couple of chances and on another day they go in.

“It was his first game in six weeks, we had a great build-up in Portugal and a great week at Colliers Park (their training facility in Wrexham).

“Gareth grew into the game, not playing for six weeks that might be understandable. Hopefully’s he’s saving it for Hungary.”

Some 3,000 seats will be unfilled at the venue after UEFA ordered a partial stadium closure following the behaviour of Hungary supporters in Slovakia in March.

Hungary fans were found guilty of racist behaviour, vandalism and the setting off of fireworks. The Hungarian Football Federation must display a banner with the wording ‘EqualGame’ on it in the closed sector.

“There will be less fans in the stadium but I understand it’s a very good atmosphere,” Giggs said when asked about the threat of racism from Hungary fans.

“I’ve talked before about sanctions on racism not being strong enough. They need to be stronger.

“But for me it’s all about concentrating on the game. I’ve got enough to worry about with winning this game.”

Wales are set to carry a potent attacking threat with David Brooks, who scored a consolation goal after coming on as a second-half substitute, expected to prove his fitness after an ankle problem.

Rossi admits he has been astonished by the speed of James, comparing him to former sprint champion Usain Bolt and ex-Brazil striker Ronaldo.

“In the past I played against a very fast player who, according to me, was the best after Maradona – Ronaldo,” said Rossi, the former Brescia and Sampdoria defender.

“His acceleration looked like James. He was just not known for speed but for everything. James’ speed reminds of Usain Bolt – to be so fast like him is really incredible.

“In the last years I don’t remember one player that gave me this sensation.”