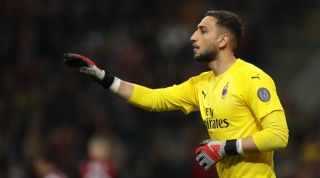 The Gunners are on the lookout for a replacement for the retiring Petr Cech and Bernd Leno is yet to fully convince at the Emirates, reports Italian outlet Tuttomercatoweb.

Donnarumma is on the Premier League side’s radar but is likely to have a price tag in the region of what Liverpool paid Roma for Alisson Becker last summer – around €70 million (£61.8 million).

With the threat of further Financial Fair Play sanctions looming and Milan's hopes of obtaining Champions League revenue up in smoke after securing a fifth-place finish on Sunday, the goalkeeper’s sale could give the club an important financial boost.

The report adds that the Italy international’s contract situation could be significant, as he is entering the final two years of his deal and there is a risk that the club could end up in another stand-off with the player and his agent Mino Raiola, like in 2017.