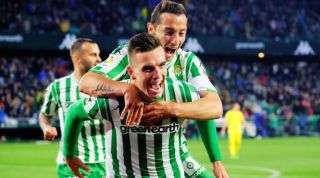 The Argentina international has impressed in La Liga this season, scoring 16 goals from midfield, and his loan deal from PSG was made permanent in April.

Reports over the weekend revealed that Spurs have submitted a €60 million bid for the 23-year-old and Marca has now added that United could soon follow as they weigh up a move.

Real Madrid, meanwhile, have contacted the player’s representatives to ask about his plans.

The Betis man has been scouted by a variety of clubs throughout the season and has a contract with the Seville club until 2023, but PSG have retained a 20 per cent sell-on clause for any future sale.

The La Liga outfit hope to keep the player for at least one more season, but their failure to qualify for Europe could make that difficult and the club hierarchy are now focused on obtaining a fee close to the Argentine’s €100 million release clause.