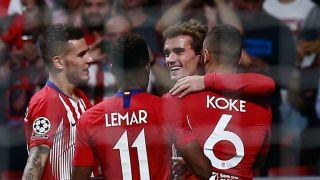 The France forward was at his talismanic best in Atleti's 3-1 Champions League win over Club Brugge, scoring twice and setting up Koke's late third as Simeone's side won their second consecutive Group A game.

He was heavily linked with a move to LaLiga rivals Barcelona during the off-season, but pledged his future to Los Rojiblancos shortly before the World Cup kicked off and has started the season brightly.

His brace against the Belgian champions took him to four goals for the campaign and Simeone was quick to lavish praise on the 27-year-old.

"I said it last season and I'll say it again - for me Griezmann is the best player in the world," he said.

"He won the Europa League, the World Cup, the [UEFA] Super Cup and finished second in a league in which both Barcelona and Real Madrid are in.

"He is in the place he wants to be. He chose to stay at Atletico and these are the consequences. He is enjoying a very important moment in his career."

Atleti failed to progress from the Champions League group stage last season after picking up just one win from their six games. Victory over Brugge, however, sees them sitting pretty with Borussia Dortmund on six points – the perfect platform from which to progress this time around.

Griezmann takes partial responsibility for last season's failure, but thinks he is in the kind of form that will help avoid a repeat.

"Last year I wasn't at my best and I think our poor Champions League campaign was partly my fault," he told UEFA.com.

"We couldn't have the kind of season in this competition that we wanted but now I'm feeling good and enjoying my football.

"Scoring twice is always nice, it gives you confidence and hopefully I can continue in that vein."