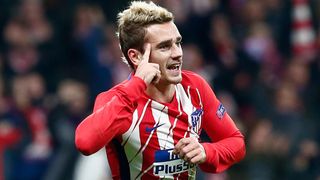 Antoine Griezmann is happy at Atletico Madrid after returning to goalscoring ways, according to midfielder Koke.

Griezmann ended a run of eight games without a goal for his club with an incredible overhead kick in a 2-0 win over Roma in the Champions League on Wednesday.

The France international also continues to be linked with a move away from Atletico, but Koke said Griezmann was happy at the LaLiga giants.

"After a while without scoring he could help the team with a goal and an assist to Kevin [Gameiro] for the second goal.

"He left happy after the match because he wasn't in a good streak."

Atletico, unbeaten in LaLiga but sitting fourth, are back in action with a trip to Levante on Saturday.