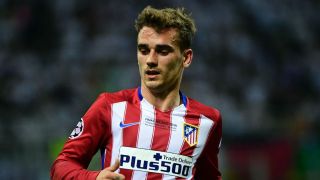 Atletico Madrid star Antoine Griezmann has ruled out a move to Real Madrid or Paris Saint-Germain, but he would be open to a transfer to Barcelona or the Premier League.

The 25-year-old is one of the most sought-after players in the game and has been linked with a move away from Atletico on more than one occasion, despite penning a new deal at the Vicente Calderon until 2021 in June.

Manchester United are allegedly keen to lure him to Old Trafford and Griezmann has now boosted the Premier League side's hopes of getting their man by admitting he can see himself in the English top flight.

"A transfer between Atletico Madrid and Real Madrid is not an option," Griezmann told Telefoot.

"Barcelona would be an option. But they have three untouchables in attack at the moment.

"PSG could be an interesting option, but I do not want to move to Ligue 1 at this stage of my career.

"But I do not want to leave Atletico at all costs."