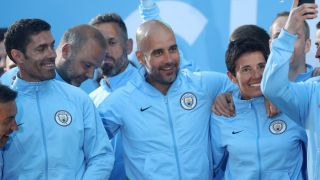 Gabriel Jesus' goal deep into stoppage time at Southampton gave Manchester City a 1-0 final-day win to bring up another landmark in the Premier League champions' incredible season, and the club's hierarchy has duly rewarded head coach Pep Guardiola with a two-year contract extension.

The Catalan leapt on to the field jubilantly on Sunday to join the celebrations in the knowledge his team had become the first in English top-flight history to reach 100 points in a single campaign.

City have made a habit of breaking new statistical ground while turning the title race into a procession, and their rivals may have to get used to witnessing more of the same, with Guardiola now contracted to the club until the conclusion of the 2020-21 campaign.

Here, we have a look at some of their most astonishing numbers this term…

100 – City passed Chelsea's previous Premier League best of 95 points by beating Brighton and Hove Albion 3-1 in their penultimate match. Adjusting Liverpool's efforts in the 1978-79 season to three points for a win, the overall record stood at 98.

100 – Despite winning six previous league titles across spells at Barcelona and Bayern Munich, Guardiola has reached 100 points in a season for the first time in his career - surpassing 99 with Barca in 2009-10.

32 – No English team has won more games in a top-flight season than City this term. Defeats to Liverpool and Manchester United and draws against Everton, Crystal Palace, Burnley and Huddersfield Town are the only blots on their record. Their 16 away wins also represents a competition best.

18 – Beginning with a 2-1 win at Bournemouth on August 26 and concluded by 1-0 triumph at Newcastle on December 27, City set a Premier League best of 18 consecutive victories.

1 – Guardiola is the first Spanish manager to win the Premier League.

19 – The gap between first and second in the final standings has never been bigger than the 19-point gap between City and United.

79 -   No Premier League side has ever had a larger positive goal difference.