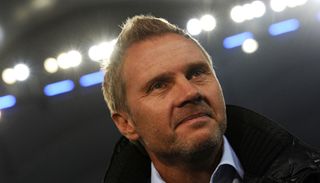 Fink said Real Madrid's commitment in the Champions League semi-final second leg against Borussia Dortmund, when they nearly overturned a 4-1 first-leg deficit, should serve as an example to his players.

"Real bit and scratched against Dortmund, they wanted to win at any cost," Fink told the SID news agency. "I demand full commitment. Even if that is not enough for us to win the match, at least we can leave the stadium with our heads held high."

Fink was furious with his team after they lost three matches in a row this month, including a 9-2 mauling at champions Bayern Munich, and warned that players who did not pull their weight would leave the club.

Eighth-placed Hamburg rebounded to beat Mainz 05 and Fortuna Dusseldorf, but crashed 4-1 at Schalke 04 on Sunday. Their next match is at home to VfL Wolfsburg on Sunday.