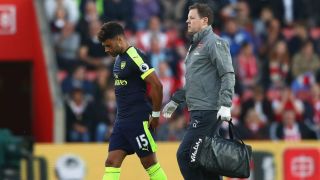 Arsenal manager Arsene Wenger is unsure if Alex Oxlade-Chamberlain will miss the FA Cup final after sustaining a hamstring injury against Southampton.

The England international lasted just 36 minutes of the Gunners' 2-0 victory at St Mary's Stadium before being replaced by Hector Bellerin.

Oxlade-Chamberlain is now a major doubt for Saturday's trip to Stoke City, while the cup final with Chelsea is just over two weeks away.

If he were to be ruled out, it would represent further disappointment in the competition for Oxlade-Chamberlain, who missed the 2014 triumph over Hull City through injury, while 12 months later he was only used as a late substitute against Aston Villa.

Providing an update on the player's status, Wenger said: "It's a hamstring problem but we don't know how bad it is.

"I don't know [about the FA Cup final]. He walks properly.

"I didn't see any incident where he had to stop a sprint. It was more fatigue, but it's difficult to assess now after the game.