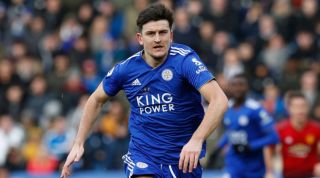 Virgil van Dijk became the most expensive defender ever when he sealed a £75 million switch from Southampton to Liverpool in January 2018.

But Sky Sports News reports that United are willing to offer the Foxes up to £80 million for England international Maguire.

The 26-year-old has been a major target for the Old Trafford club throughout the summer, but Leicester have resisted their advances by insisting he isn’t for sale.

However, the player is eager to join the Red Devils and has told the King Power hierarchy that he wants to leave before the transfer window shuts for Premier League clubs on August 8.

Maguire has allegedly become frustrated by his club’s hard-line stance, but Leicester’s resistance is expected to continue as they demand a £90 million fee.

Time is running out with just one week remaining in which to bring in new players, with Aaron Wan-Bissaka and Daniel James being the only new arrivals in Ole Gunnar Solskjaer’s squad so far this summer.