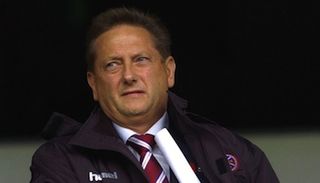 Edinburgh-based Hearts, who said on Monday they intended to appoint administrators but have yet to confirm they have, have suffered the fallout from the financial problems of Lithuanian businessman Vladimir Romanov, their largest shareholder.

"It's a huge club, huge task," Bryan Jackson, one of the joint administrators from BDO, told Sky Sports News.

"I think we all know from the press in last few weeks that we are starting from a negative situation where people haven't been paid, cashflow is negative - it's the worst month of the year in terms of income.

"Right now, there's a really major cashflow problem and we need to look at ways, if any, we can get round that."

Last week Hearts put all their players up for sale and were banned from making new signings, with the Scottish Premier League saying on Wednesday its rules on points deductions would be enforced.

"As Heart of Midlothian is subject to an insolvency event, a 15-point deduction will be applied to its total points in the League Championship for next season 2013/14," a league spokesperson said in a statement.

"In addition, Heart of Midlothian is subject to an embargo on registering players with the SPL whilst in administration."

Hearts, who have 25 million pounds of debt, invited offers for all their players last Thursday, saying they urgently needed funds to keep going over the close season when there was no matchday income.

The SPL said on Friday that Hearts had failed to pay their players on time and had been banned from signing new ones.

Long a poor relation compared to the English Premier League, Scottish football has struggled to adjust after the collapse of 54-times champions Rangers last year under a pile of debt.

Rangers had to relaunch from the fourth tier and were promoted to the third at the end of last season.

Asked if he thought Hearts were salvageable, Jackson said: "Clubs are always saveable.

"I wouldn't take it on if it wasn't saveable. But that doesn't mean that it will be saved, as we've seen in the past some clubs do not get saved because the circumstances don't come good."