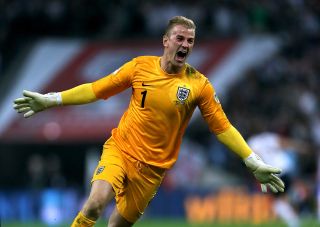 Goalkeeper Joe Hart has joined Tottenham on a free transfer following his release by Burnley.

Here, the PA news agency looks at some highs and lows of the 33-year-old’s career.

High: Wins the FA Cup with Manchester City in 2011 and then the Premier League a year later, and claims the division’s Golden Glove award for most clean sheets in both seasons.

High: Impresses as part of an England squad that reaches the quarter-finals of Euro 2012.

High: Saves a Ronaldinho penalty and the subsequent follow-up in England’s 2-1 friendly victory over Brazil at Wembley in 2013.

High: Bounces back to regain his place and help City win the Premier League that term.

High: While City are beaten 3-1 on aggregate by Barcelona in the 2014-15 Champions League last 16, Hart keeps out Lionel Messi’s spot-kick in the first leg and produces a fine display in the second. He subsequently finishes the season with a fourth Premier League Golden Glove award.

High: England are beaten 2-0 by Spain in a friendly in Alicante in November 2015 but it is a special night for Hart as he captains the side.

High: Hart’s penalty save to deny Zlatan Ibrahimovic helps City get past Paris St Germain in the 2015-16 Champions League quarter-finals.

Low: Euro 2016 sees Hart notably fail to keep out a Gareth Bale free-kick in England’s 2-1 win over Wales and a Kolbeinn Sigthorsson shot in the embarrassing 2-1 last-16 loss to Iceland.

Low: Hart loses his spot as City’s number one at the start of 2016-17 under new boss Pep Guardiola and joins Torino on loan.

Low: A further loan spell follows the season after at West Ham, where he is first choice until being succeeded by Adrian in December.

Low: Misses out on England’s squad for the 2018 World Cup.

Low: After joining Burnley on a permanent deal in the summer of 2018, he is dropped after a 5-1 loss to Everton on Boxing Day that year. Does not play another Premier League game for the club and is released at the end of the 2019-20 season.

High: Seals Premier League return as he signs for Tottenham on a two-year deal.