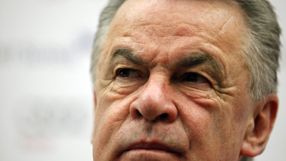 "It'll be a special match because I'll meet Lothar Matthaus," Hitzfeld told a news conference in Sofia on Friday. "We were together and I know him very well.

"Matthaus was a successful player and now he's a good coach. This is a very important game both for him and for me."

Hitzfeld was Matthaus's coach at Bayern between 1998 and 2000 when the Germans lost 2-1 to Manchester United in a memorable Champions League Final in 1999.

Montenegro top qualifying Group G with 10 points from four matches, three ahead of England, who have played one game fewer.

Switzerland and Matthaus's Bulgaria have three points from three games, while Wales are bottom with no points.

"We must fight hard because we know that Bulgaria are a very strong and a very skilful team," Hitzfeld said.

Switzerland striker Alexander Frei added: "It'll be a difficult game because the two teams know they're out if they lose.

"It's pity that Matthaus has not worked yet in the Bundesliga. He and Hitzfeld are very famous coaches and they did a lot football."

"I'm saying this because Swiss footballers are playing in the top European championships and they also have more international experience than my players," Germany's former World Cup-winning captain said.