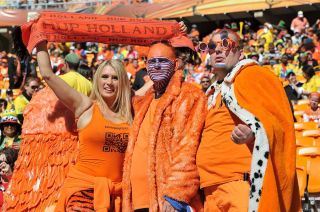 Ronald Koeman’s Holland stand between England and the Nations League final in Portugal.

Here, Press Association Sport takes a close look at the Oranje ahead of the June 6 semi-final clash in Guimaraes.

Holland are one of the most loved international teams thanks to their thrilling football, sparkling talents and bright orange shirts. European champions in 1988, they have finished as World Cup runners-up on three occasions. The most recent of those final appearances came in 2010 and four years later they reached the semi-finals under Louis van Gaal. However, things went awry after the World Cup in Brazil as Holland missed consecutive major tournaments for the first time in 32 years. Having failed to make it through to a bloated Euro 2016, the Oranje faltered in another qualification campaign as they finished behind France and Sweden in their group for last year’s World Cup.

Former Southampton and Everton manager Koeman’s first match in charge of the country he represented with aplomb was a 1-0 friendly home defeat to England in March 2018. Their next game was a 3-0 win against Nations League hosts Portugal and they have not looked back, with some solid friendly results followed by a stirring Nations League campaign. Koeman’s men topped Group A1 ahead of World Cup winners France and condemned 2014 world champions Germany to relegation from the top tier. Bouncing back from a 2-1 loss at France in their opener, they beat Germany 3-0 in Amsterdam before overcoming France 2-0 in Rotterdam. Late Quincy Promes and Virgil van Dijk goals sealed a 2-2 draw at Germany in November to snatch top spot. The Germans gained a little revenge by beating them 3-2 in March’s Euro 2020 qualifier.

With the likes of Arjen Robben and Wesley Sneijder having moved on, an exciting new crop of players is replacing them. Holland skipper Van Dijk has established himself as one of the world’s best centre-backs – a conversation Ajax teenager Matthijs de Ligt looks set to join him in sooner rather than later. Frenkie de Jong was another key component of the Ajax side that captured the imagination with their run to the Champions League semi-finals and will be looking to impress ahead of joining Barcelona. The squad’s talent is offset by experience, too, with the likes of Georginio Wijnaldum, Daley Blind, Ryan Babel and the divisive Memphis Depay.