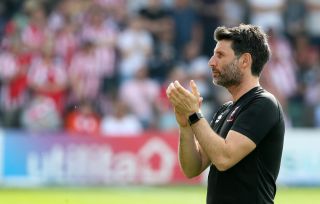 New Huddersfield boss Danny Cowley revealed he felt taking on the job was too good an opportunity to turn down.

Cowley, 40, leaves Sky Bet League One side Lincoln and will be joined by his brother and assistant boss Nicky at John Smith’s Stadium.

The Terriers maintain the duo had been identified as “first choice for this appointment after an extensive and detailed search” following the dismissal of Jan Siewert, who was sacked on August 16 on the back of a poor start to the new season.

🤔 How much do you know about Danny and Nicky Cowley?— Huddersfield Town (@htafc) September 9, 2019

The Cowley brothers led Lincoln back to the English Football League in 2017 and – having lost out in the League Two play-offs first time around – won the title last season. The Imps had also reached the FA Cup quarter-finals while they were a non-league club.

Huddersfield chairman Phil Hodgkinson revealed the Cowleys had initially turned down the opportunity to open talks with them, before eventually having a change of heart.

The duo wrote an open letter to Lincoln fans, reflecting on “without doubt, the hardest decision of our lives”.

The statement on the Lincoln official website read: “More than the trophies it has been the special relationships that we have created with so many people at all levels of the football club.

“So why leave, you ask…? Nicky and I have a burning ambition to challenge ourselves at the highest possible level.

“We don’t know if an opportunity as good as this one will come around again and we never want to live with regret.”

The statement continued: “It has been the greatest privileges for Nicky and I, to manage Lincoln.

“We will never ever forget the support we have had and know that we would not be in this fortunate position without all of you.”

The duo will now turn attentions to a first match in charge for Sunday’s home clash against Sheffield Wednesday – who will also have a new manager in Garry Monk and were linked with a move for Danny Cowley.

Huddersfield chairman Hodgkinson added on the club website: “From the outset, (head of football operations) David Webb and I knew how important this next appointment is for the club.

🗣️ “Our persistence paid off and when we spoke, there was an obvious chemistry.— Huddersfield Town (@htafc) September 9, 2019

“We undertook a very detailed and thorough process to identify the right person to lead the first team forward, first outlining the qualities we were looking for in the right candidate and then establishing which managers matched them.

“Our research, due diligence and work resulted in a shortlist of four candidates, and Danny Cowley was number one.

“His track record is there for all to see – he has led his previous teams to five promotions and several cup successes – and our character references revealed a man who is one of the most detailed managers around; meticulous in his preparation, and highly regarded by his peers.”

Hodgkinson feels the club were right not to give up their pursuit of the highly-rated coaching duo.

“At that stage we could have easily pursued one of the other options we had identified – all of which are fine managers – but David and I felt it was important to try and persuade them to talk to us,” he said.

“We firmly believed that they were the best men to take us forward, and we didn’t want to give up on them.

“Our persistence paid off and when we spoke, there was an obvious chemistry.

“They believe in the way we operate as a club and it affirmed that they would be a superb fit for us.”