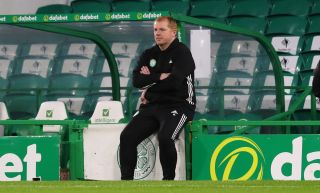 Neil Lennon was left dejected after Celtic were bounced out of the Champions League with a 2-1 defeat against Ferencvaros.

Midfielder David Siger shot the Hungarian side into the lead in the seventh minute of the second qualifier but Ryan Christie, deputising for the injured Odsonne Edouard as the Hoops started without a recognised striker, levelled in the 53rd minute with a deflected shot.

Celtic dominated possession before and after the break but in the 74th minute, against the run of play, Tokmac Nguen snatched a breakaway goal to see the Scottish champions drop down to the Europa League qualifiers.

It is the first time in 15 years that the Scottish champions went out of the Champions League so early, and Lennon said: “I am angry, frustrated, disappointed. All those and more.

“We had enough chances to win the game comfortably. There is no excuses. It is on me and I have to accept the consequences of that.

“We have to apologise to the supporters and look to make the best of what we have got for the rest of the season.

“The game was easier than I thought it was going to be. We had really good control.

“They scored early but I thought we started well in the second half and scored, hit the bar and we only have ourselves to blame.

“I have to take responsibility. It is the first time in 15 years we have gone out so early, that is down to me.”

Lennon, who stated that strikers Albian Ajeti and Patryk Klimala who started on the bench were “not match fit”, also claimed there are players who have told him they do not want to be at Parkhead.

He said: “There are some players who may want to leave.

“They have made inroads into that in the last six months or so. So if they don’t want to be here, we have to do something about it.

“If they are making waves to leave the club they are obviously not committed.

“We want players committed to the club. I’m not going to go into it but I’m putting it out there because it has been bugging me for a long, long time.”

By contrast, Ferencvaros boss Sergei Rebrov was delighted with the victory.

He said: “We played against the strongest team we have played in Europe.

“Maybe they didn’t shoot enough. I’m very glad for my players. We tried to play to our plan. The early goal helped us.

“I was really surprised they didn’t play with a recognised striker because they had two strikers on the bench.

“Their plan was to find fast players between the lines. Most of the time we were defending but we didn’t give Celtic too many chances.

“They had some problems in defence. We tried to go for counter-attacks. Tokmac is very fast and he used it for the winning goal.”