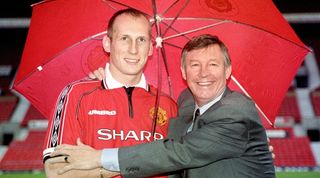 The Dutchman helped the Old Trafford club to win three Premier League titles, the Champions League and an FA Cup between 1998 and 2001, before being sent to Italy out of the blue.

Sir Alex Ferguson later admitted that selling the Dutchman was the biggest mistake of his career, but Stam revealed that the Scot didn’t need much time to break the news.

"Like in the first meeting to the last, I didn't have a lot of stuff to say. Of course my status and personality was different and he knew that as well.

Ferguson had been angered by extracts from Stam’s book Head-to-Head, in which the centre-back implied he had been tapped up by the United manager, but the former stopper doesn’t believe it was the reason for his departure as he looked back on the day he was sold.

“I told my wife I am going to go early in the morning because I want to speak to the manager about what happened,” he said.

“I heard he wasn’t too happy with everything. I spoke to him and we had a brief conversation. Not the best to be honest. I went back into my car and I went home.

“My agent phoned me and he told me: ‘Jaap where are you?' I said I was in my car. I’d just had a meeting but I went home.

“He said: ‘They’re going to call you back because they’ve sold you.’

“I thought he was joking. I hung up and then Sir Alex phoned me and he asked me where I was. I said I was in the car halfway from Carrington to my house and he said: ‘Wait for me I’m going to come over.'

“I spoke to him in the car and he told me that they had an offer at Monaco where all the teams from the Champions League came together. They had an offer and they agreed it, and he was going to be playing other players.

“It was hard from out of the blue to say ‘OK, we’re going to sell Jaap’ without any reason.

“It was quite convenient that the book was there at that time. I think it's better to just be straightforward in how it is.”