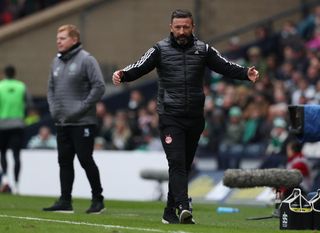 In the 72nd minute, with the Dons trailing from to goals from James Forrest, Odsonne Edouard and substitute Tom Rogic, and with defender Dominic Ball, midfielder Lewis Ferguson and assistant manager Tony Docherty all sent off, McInnes incurred the ire of Thomson, via the fourth official Nick Walsh, and was sent to the stands.

McInnes appeared to gesture to Celtic fans who were singing that he was “sad orange b*****d”.

The Dons boss claimed Ball’s second yellow card for heading Celtic midfielder Ryan Christie in an aerial challenge was harsh, so too Docherty’s dismissal for something said to Thomson at the interval, but admitted Ferguson’s straight red card for a foul on Rogic was correct.

Asked if he had reacted to sectarian chanting from the Hoops fans, the former Rangers midfielder said: “Well, aye, I let it go the first time.

“I shouldn’t react, and I was wrong to do so, I should be better than that.

“I’ll take my punishment, but I’ll be interested to see if everybody gets punished for it, but I shouldn’t have reacted.

“I’ve heard that song aimed at me 100 times and I’ve never reacted to it before.

“But I think the frustration from the game played a part in that.

“The fourth official deemed my reaction a red card offence and, if it is, it is, and I will take my punishment for that.

“But this isn’t my battle, it is for others to condemn. But for my small part in it, I take responsibility for it. I didn’t react the first time, I did the second time. ”

Hoops boss Neil Lennon said: “I don’t know what Derek got sent off for, but, if that is the case, then there is no place for it.

“I have ultimate respect for Derek McInnes, I view him as a friend and I think he is a great football manager and, if that is the case, then that is very disappointing, but I don’t know the ins and out of that.”