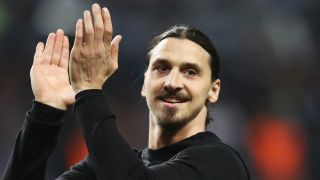 Zlatan Ibrahimovic is a man in demand and the Swede's agent will soon discuss the forward's future with Manchester United as his contract nears an end.

Mino Raiola claims the 35-year-old, who has been sidelined with a knee injury since last month, is wanted by "many clubs", although the prolific striker would only consider a move within Europe.

Ibrahimovic defied the doubters to score 28 goals in all competitions in his debut United season, which could also be his last as the former Paris Saint-Germain star's deal expires next month.

"Many clubs have asked for Zlatan. He will play at least one more year maybe even two years.

"I'll talk with the club and we'll see what to do about the future. It's still [too] soon. These offers have come from a lot of different leagues, but he'll stay in Europe."

Ibrahimovic's injury, sustained in the Europa League quarter-final win over Anderlecht, saw him miss the showpiece of that competition in his native Sweden.

United lifted the trophy with a 2-0 win over Ajax, another of Ibrahimovic's former clubs, to secure a return to the Champions League.