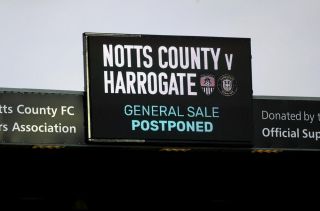 The National League has announced the indefinite suspension of its three divisions due to the coronavirus crisis.

Having controversially played on the day after the Premier League and EFL announced their games were off due to Covid-19, the competition belatedly called a halt to all matches on March 16.

Discussions as to how best finish the season have continued and the National League has now confirmed its three campaigns are subject to an undetermined postponement.

A statement read: “The National League Board met earlier today and has reviewed its prior decision to suspend the competition until at least 3rd April 2020.

“In consideration of the very serious and unprecedented national public health emergency caused by the coronavirus, the Board has taken the decision to suspend the National League, National League North and National League South competitions indefinitely.

“The National League is currently obtaining specialist legal advice, is consulting regularly with The Football Association and other stakeholders, and is committed to involving its member clubs in a pending decision on how best to conclude the 2019-20 season.”