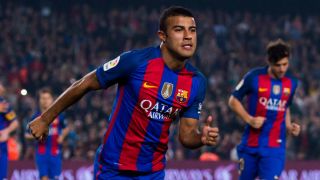 Inter are confident of signing Rafinha from Barcelona but Piero Ausilio insists they need time to complete a potential deal.

The Serie A club bolstered their ranks with the loan signing of centre-back Lisandro Lopez from Benfica.

There has been speculation that Rafinha could be next through the door at San Siro. The midfielder has not played this season, having been kept on the sidelines by a knee injury.

Barca reportedly rejected a €20million offer from Inter but sporting director Ausilio remains hopeful that a deal can be struck.

"We're always confident when we work," Ausilio told Sky. "We need time to do it though."

Inter have also been linked with former Chelsea midfielder Ramires, the Brazilian who now plays for Chinese Super League side Jiangsu Suning.

But on those reports, Ausilio said: "As for Ramires, he's a Jiangsu Suning player and they'll decide what to do with him. We're working on other things."