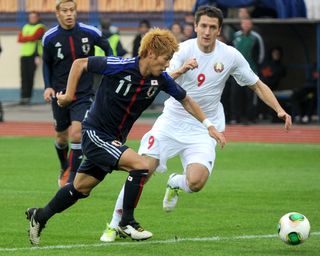 Tigorev struck a minute before half-time to give Georgi Kondratjev's men only their second win in seven matches.

Japan coach Alberto Zaccheroni kept faith with the same XI that had slipped to defeat against Serbia on Friday, but they produced another uninspired performance as they lost their penultimate international of the year.

The visitors made the better start to proceedings as Shinji Kagawa shot wide from range before Shinji Okazaki forced Belarus goalkeeper Sergei Veremko into a near-post save.

Veremko was kept busy in the first half, and needed to be at his best again on 19 minutes to deny Atsuto Uchida from close range.

Japan did not heed that warning, though, and after 44 minutes they fell behind when Tigorev met Timofei Kalachev's lay-off with a fierce drive that flew past Kawashima and into the top corner.

Kondratjev's side continued to push after half-time and almost doubled their lead 10 minutes into the second half as Kawashima turned substitute Vitali Rodionov's effort around the post.

Zaccheroni's men remained a dangerous attacking force and were denied a leveller just before the hour mark, Veremko blocking Okazaki's effort at the near post after he had latched on to Masato Morishige's knock-down.

Veremko again came to Belarus' rescue as he tipped Maya Yoshida's header over the crossbar, and that proved to be the last real chance of the game as the European side held on for victory.