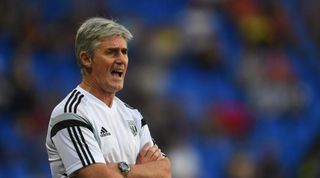 The Scot has made a host of signings since being appointed as Pepe Mel's successor at The Hawthorns, but is eager to bring in one more new face.

Silvestre Varela arrived on a season-long loan deal from Porto last weekend and Irvine has set his sights on another winger.

"We're hoping to bring in one more signing before the window shuts - another wide player would complete the balance of the squad," he said.

Irvine revealed that Varela and and two of his other new recruits - Joleon Lescott and Georgios Samaras - will miss Saturday's Premier League clash at Swansea City.

"He's going to need the international break to have a mini pre-season.

"Neither Samaras nor Lescott will be fit for the weekend.

"The fact is none of them have had a pre-season."

Left-back Sebastien Pocognoli, another close-season signing, is a doubt for the clash at the Liberty Stadium after missing training on Thursday due to a thigh injury.