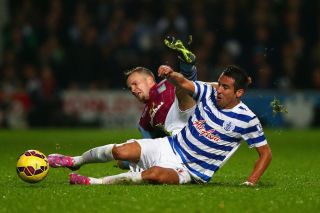 The Chile international penned a year-long deal at Loftus Road in the last transfer window after finding himself surplus to requirements at Juventus.

Isla initially struggled for form at QPR, as Harry Redknapp's men made a sluggish start in the Premier League, leading to suggestions he would look to move back to Serie A.

However, the 26-year-old put in a much improved showing as QPR defeated Aston Villa 2-0 on Monday and he insists he is committed to the club.

"That [going back to Italy] was never going to happen," he told the London Evening Standard.

"People talk but I've never spoken about it. I've not spoken to a single director at Juventus since I came to England, not even to the coach there, Massimiliano Allegri.

"It is important for me to stay here a long while because I need to get match fitness back after the cruciate knee ligament injury I had [while playing for Udinese in 2012].

"After playing so many games for Udinese, it was a bit of a sad situation at Juventus.

"Because of the injury and other reasons, I didn't play all that much for Juve. On the other hand, I'm playing regularly here, so I'm really happy about it."