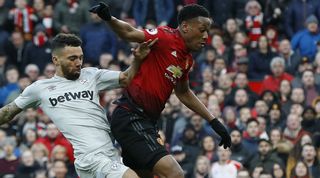 According to the Independent, West Ham have no willingness to sell Diop below their valuation unless Martial is on the table.

United's reluctance to meet the Hammer's initial quote of £60 million for the French defender has prompted the proposal.

Martial was under serious scrutiny whilst Jose Mourinho was at Old Trafford, and there was much talk of the striker bein sold, or even leaving on a free transfer.

Now, however, the United hierarchy are thought to see Martial as a valuable asset who could still prove to be a world class player for the club.

Having scored 10 goals last season, the 23-year-old signed a new five-year-deal and his value is bolstetred as a result.

It is increasingly likely that United will have to stump up the cash if they want to sign the 22-year-old Diop this summer.

Andy Mitten column: Of course people form opinions on footballers from their social media output – why don’t players realise that?