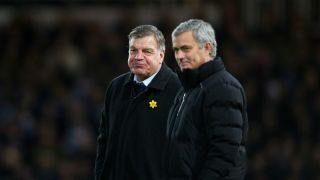 Jose Mourinho's claim that Manchester United should have their match with Crystal Palace moved to help their Europa League final chances have been backed by Eagles boss Sam Allardyce.

All fixtures on the final day of the Premier League will kick off on Sunday at 15:00 local time, with United having just two days of rest before meeting Ajax in Stockholm.

Confirming that a raft of academy players will play at Old Trafford this weekend, Mourinho said: "I hope that Big Sam [Allardyce] shows he's a good friend and he goes slow. He tells [Wilfried] Zaha to go slow, he leaves [Christian] Benteke at home."

With Palace having secured Premier League survival last week, nothing is riding on the clash and Allardyce accepts Mourinho's gripe.

He said: "It's a great shame that we are not like other countries, who will bend over in fixture terms to help their teams win European competitions.

"When you look at Jose's fixture list, this will be his 63rd game on Sunday. It's a tremendous effort but [there has been] no help unfortunately from the Premier League to give him the best chance of winning a trophy that Manchester United haven't won.

"That would happen abroad. They would change the fixtures for you.

"Because there is nothing on our fixture it is easy to change it. We're not going to influence anything one way or the other in terms of results for ourselves, and it would have been a good gesture by the Premier League to have done it to give them the best chance."

Despite sympathising with the Portuguese, Allardyce will not go lightly as the Eagles look to finish a difficult campaign on a high.

"We will play the fittest team we've got but I think there will be no Andros Townsend because he's been playing with an Achilles problem," Allardyce explained.

"Yohan Cabaye is still feeling his foot but it looks like James Tomkins is OK. There will be some changes to the team but my team want to play at Old Trafford, they don't want me to leave them out.

"My lads want to go there and finish the season off in one of the best venues in the world of football. And whether Jose plays a weakened side or not, it will always be a difficult task because even if they are younger players at Manchester United, they are definitely very talented. We have a job to do and hopefully we can go there and do it."