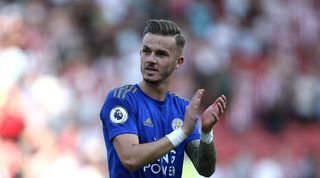 The 22-year-old has enjoyed a fine start to the season, although he was unable to prevent the Foxes losing 1-0 at Old Trafford on Saturday.

United paid £80m to acquire Harry Maguire from Leicester before the start of the campaign and considered making a move for Maddison too.

Ole Gunnar Solskjaer's side ultimately decided against submitting a bid because they knew Leicester would be reluctant to lose two key players in the same transfer window.

However, The Times report that they remain interested in the former Norwich man and plan to test the Foxes' resolve at the end of the season.

Maddison is under contract at the King Power Stadium until 2023, and United would have to pay more than £60m to prise him away from the East Midlands outfit.