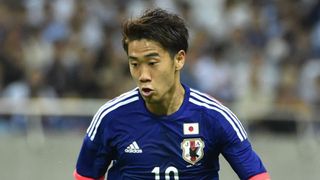 Vahid Halilhodzic's men had opened their Group E campaign - which doubles as qualifying for the Asian Cup - with a goalless draw against Singapore, but never looked in danger of dropping points against their 180th-ranked opponents.

Japan enjoyed the lion's share of possession throughout but had to wait until the 29th minute to go in front - Keisuke Honda firing home from 20 yards.

Maya Yoshida doubled the advantage in the second half, before Shinji Kagawa atoned for an embarrassing earlier miss by slotting a third into the bottom right-hand corner of the goal.

Japan dominated from the off and probed the Cambodia defence with alarming regularity, but struggled to truly test visiting goalkeeper Sou Yaty.

That was until Honda received the ball on the edge of the box and pulled the trigger just short of the half-hour mark.

Yaty was unable to deal with the shot, unconvincingly flapping at the ball as it sailed in over his head.

Kagawa should then have found the net when he stumbled over the ball after it was crossed in from the right, but worse was to come for the Borussia Dortmund attacker.

Having drawn a diving save from Yaty with another shot at goal, Kagawa looked a sure bet to make it 2-0 when the ball was squared to him from the left by Yoshinori Muto.

However, the former Manchester United man was unable to sort his feet out and, faced with an open goal from three yards out, essentially passed the ball back into the arms of a grateful Yaty.

Against better opposition, Japan's profligacy would probably have been punished, but Cambodia offered little going forward and Yoshida unleashed a low drive from 20 yards five minutes into the second period to give his side a cushion.

Kagawa finally put his own name on the scoresheet with a well-placed shot after the Cambodian defence failed to clear its lines in the 61st minute.

The result lifts Japan, who had a Masato Morishige header cleared off the line in the closing stages, to second in Group E, behind Singapore on goal difference.