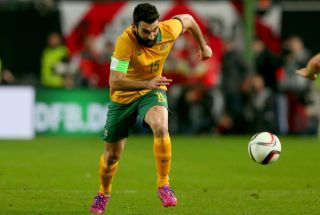 Crystal Palace captain Mile Jedinak has been withdrawn from the Australia squad as one of three changes confirmed on Friday.

Jedinak, 31, suffered a hamstring injury during Palace's 4-1 extra-time win over Shrewsbury Town in the League Cup on Tuesday.

That setback, which came during his first start of the season, will see Australia's captain miss the Socceroos' World Cup qualifiers against Bangladesh and Tajikistan.

Also withdrawn from the squad were Bayer Leverkusen attacker Robbie Kruse and recent Roda JC signing Tomi Juric, with are both still recovering from injuries.

Lazio's Chris Ikonomidis, Heidenheim's Ben Halloran and Brisbane Roar midfielder Luke Brattan, who appears set to leave the A-League, have been called up.

Socceroos coach Ange Postecoglou said it was a chance for the trio, with Brattan the only one yet to make his international debut.

"Mile picked up a hamstring injury that will keep him out for a short period of time so he won't be making the trip for the games against Bangladesh and Tajikistan," Postecoglou said.

"Tomi and Robbie have had recent injuries and, after speaking to our medical staff, we believe they are better served staying with their clubs to regain match fitness and not undertake the travel so they are available for matches in the next window.

"It gives Chris, Ben and Luke Brattan a great opportunity to come into the group and impress.

"The players will start arriving into Perth on Sunday night as we prepare for two important matches during this stage of World Cup Qualification."

Australia host Bangladesh on Thursday before a meeting with Tajikistan five days later.