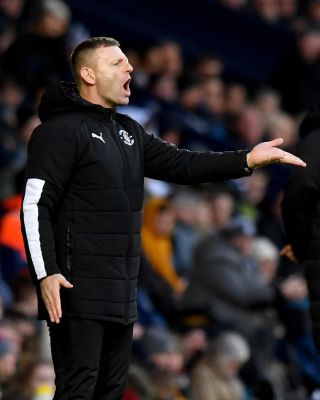 Luton boss Graeme Jones insists his focus was never on ending miserable runs after watching his team finally win away from home at Middlesbrough.

The Hatters avoided equalling a club record 13th defeat in a row courtesy of Ryan Tunnicliffe’s 17th-minute winner at the Riverside Stadium.

Tunnicliffe was on hand in the penalty area to sweep a first time finish inside goalkeeper Aynsley Pears’ bottom right corner after Dan Potts’ cross was not dealt with properly.

That proved to be the only goal of the game to lift Luton to within four points of safety and follows on from the midweek win over Sheffield Wednesday.

“I think next game let’s win it, I don’t believe in hoodoos,” said Gateshead-born Jones, back in his native north east.

“We went a bit more solid, centre-back Matty Pearson went in at right-back.

“It is about people contributing and the levels have been really satisfying. All I am interested in is winning matches, it’s game on. All I have said is if we have everyone fit we will win matches and we will be competitive.

“The belief has always been there, in the dressing room. I have been around enough to assess what I have got and I know when players are fighting for you or hanging you out to dry. It has never been the case here. It was satisfying to see the levels.

“I am delighted, this win has been coming. I have looked an absolute idiot at times but I was pleased with the control we have had on the ball today.

“There is always a plan, I have a group of players I believe in. you need everyone. It is the first time I have had everyone available, really satisfied but the players have to come in and perform.

“The definition of a team, squad, is people coming in and doing well. Ryan has the talent the experience for this level, he has not always been great, or bad, but he gives us a level and his performances have mirrored the team’s at times, getting to know the league. I believe in him.”

While Luton breathed new life into their fight for survival, Middlesbrough suffered again. They now sit just six points above the bottom three having failed to win any of their last nine matches, seven in the league, since winning on New Year’s Day. The home crowd booed at the end of each half.

Middlesbrough boss Jonathan Woodgate could not hide his disappointment.

He said: “I wasn’t happy at all with the performance. That’s all I will say. Anything is possible in the Championship, anyone can turn up and beat anyone, look at Barnsley at Fulham today.

“That game out there, we didn’t play well and you can’t say they played well. They ground out a 1-0. They had one shot on target and we did. They got the result.

“They wasted time often. It was hard to get a foothold on it. Every time the ball went out they were taking an age. It was one of those games. I am very disappointed. We weren’t good enough.

“Our final ball wasn’t good enough. A lot of our balls were just blasted across the face of goal and we should have better quality.

“I don’t blame the fans for booing us. I would have done the same. I do expect when the going gets tough, they should stand up and get on the ball and show character.”