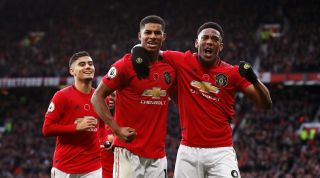 Jurgen Klopp has backed Manchester United to qualify for the Champions League this season.

Ole Gunnar Solskjaer's side are currently competing in the Europa League, having finished sixth in the Premier League last term.

United are five points adrift of fourth-placed Chelsea heading into Sunday's clash with Liverpool, but they will close the gap to two points with victory at Anfield.

The Red Devils could also qualify for Europe's foremost competition by winning the Europa League, which resumes next month.

And Klopp believes United will be taking part in the Champions League in 2020/21.

“United have a really good football team, talented and experienced,” he said “There is a lot of good potential on the pitch.

“I think they will probably qualify for the Champions League this season.

“So, of course they can beat us. But they can only play as good as we let them play.

“If we are at our best it’s difficult for every team. It’s our stadium so we have to make sure everybody knows that.”

Klopp has led Liverpool into several duels with United, having been in charge at Anfield since 2015.

And the German believes the nature of the rivalry has changed over the years, with players afforded more protection these days.

“In the good old times you saw that it was a special game because everyone flew at each other and kicked each other off the pitch. But I don’t want to see that,” added Klopp.

“If anyone asks us for that, no chance. We want to win the game; we don’t want to win one little battle.

“We accept being aggressive in a completely different way to our grandfathers.

“If we hurt someone it hurts ourselves and not the other one. You need a clear mindset and an outstanding atmosphere.”

Liverpool will move 16 points clear at the top of the table if they beat their arch-rivals on Sunday.