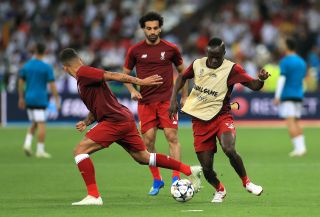 Reds top scorer Salah has contributed 94 of those goals, while Mane and Firmino have hit 79 and 77 respectively.

Klopp has guided the Merseyside club to a first top-flight title in 30 years this term, following up last season’s Champions League win.

The German acknowledges his potent front three have been central to his achievements at Anfield.

“250 goals is really exceptional,” said Klopp. “Imagine where I would be if these boys would not play for me – wow.

Liverpool remain on course to break the Premier League points tally following the midweek success in Sussex, their 30th of a remarkable league campaign.

They require a further nine points from fixtures against Burnley, Arsenal, Chelsea and Newcastle to surpass the 100 points Manchester City accrued two seasons ago.

Meanwhile, Salah is bidding to win the golden boot for a third successive season – a feat previously achieved by only Alan Shearer and Thierry Henry.

The 28-year-old, who shared the accolade with team-mate Mane and Arsenal’s Pierre-Emerick Aubameyang last year, sits on 19 league goals following his brace at the Amex Stadium, three behind the division’s leading scorer Jamie Vardy.

“He’s a striker, how can that not be a motivation for him? That’s clear,” Klopp said of Salah.

“In the last two years, he won the golden boot. Last year he shared it with Sadio and Pierre.

“That’s always important and all that stuff but in the end you can only score goals when you perform well and he did that (at Brighton), so that was really good.”

“This is Mo Salah, he is hungry,” Alisson told Liverpoolfc.com.

“He is always there fighting for a goal, helping the team on the defence phase as well.

“He is always there to help win some games for us and ready to fight always for the goal. It’s his job and he loves to do that.”

Captain Jordan Henderson claimed Liverpool’s other goal on the south coast but limped off the pitch late on with an apparent knee problem.

Klopp must wait to discover the extent of the injury but is understandably concerned and feared it “will not be nothing, probably”.