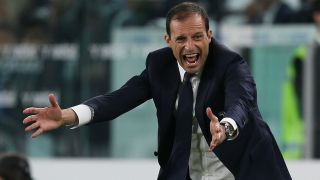 Massimiliano Allegri insists Juventus "are not in any kind of crisis" despite their rare home Serie A defeat at the hands of Lazio.

Juve face Sporting CP, who sit ahead of them on goal difference in Champions League Group D, in a crucial contest in Turin on Wednesday.

The Italian champions go into the game after a shock 2-1 reverse to Lazio, a result which ended an astonishing 57-match unbeaten run in front of their own fans.

That result was preceded by an away draw against Atalanta, meaning Juve are already five points behind early Serie A leaders Napoli.

Allegri, though, remains calm, even though he has urged his side to improve their focus, starting against Sporting.

"We are not in any kind of crisis," Allegri said at his pre-match media conference. "We are working towards being in a strong position on all fronts come the spring.

"Against Lazio, we were playing well, but paid for a couple of mistakes at the start of the second half.

"We are working to put right our mistakes. We need to improve our game management and concentration.

"We need to continue to move the ball around quickly and with clarity of mind, whatever happens in matches."

: "We're working to put right our mistakes. We need to improve our game management and concentration." October 17, 2017

With Barcelona three points clear at the top of Group D, Juve cannot afford a slip-up against Sporting.

Allegri said: "We have respect for Sporting and we need to play a strong match both technically and mentally.

"Sporting are full of talented, technical and fast players with a strong overall organisation. They took Barcelona to the wire on matchday two, so it will be a very tough match for Juve.

"If we win these two games against Sporting we are through to the Champions League knockout stages. That is our aim.

"We are aware of how important this game is for our Champions League campaign and we want to do well."

Midfielder Miralem Pjanic, who has not played since scoring in the derby victory over Torino a month ago due to a thigh injury, is in contention to feature.

Allegri added: "Miralem Pjanic is OK. He is in good shape and has had time to rest. I will decide if he plays after training.

"Having someone by his side who runs and presses like Blaise Matuidi obviously helps him greatly."