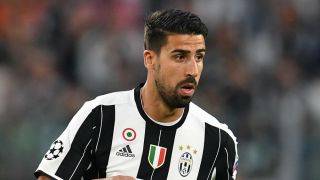 Sami Khedira has provided Juventus with a fitness boost after confirming the injury he sustained against Monaco is not serious.

However, Khedira posted on Instagram to confirm he has suffered no serious damage.

That means Juve will have Khedira available ahead of a crucial period, with the Bianconeri one win away from a sixth straight Serie A title, while they are have the Coppa Italia and Champions League finals to look forward to – the latter coming against Khedira's former club Real Madrid.

"Good news. It's nothing serious. I'll need to rest for the next couple of days but after that I'll be able to help the team in the decisive games of the season," Khedira wrote.

"Still excited we made it to the @uefachampionsleague final and especially about the way we played.

"Very much looking forward to meeting @realmadrid for the big showdown in Cardiff #FinoAllaFine #ForzaJuve #SK6."