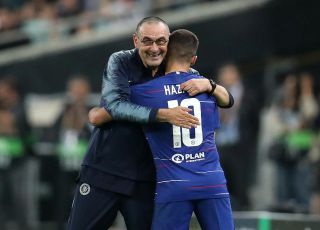 Juventus are understood to be preparing a compensation package to prise Maurizio Sarri away from Chelsea.

The Italian giants want Blues boss Sarri to replace Massimiliano Allegri in Turin, and must now stump up in the region of £5million to secure their top target.

Chelsea are understood to have no plans to sack Sarri, who led the club to a third-place Premier League finish and Europa League triumph in his maiden Stamford Bridge campaign.

Juventus sent a delegation to Baku for talks with Chelsea bosses on Sarri’s situation, ahead of the Blues thrashing Arsenal 4-1 to lift the Europa League crown in style.

Sarri appeared delighted with the first major trophy of his managerial career, but had long since accepted he would talk to his Chelsea bosses about his future come the end of the campaign.

While Chelsea would be prepared to let Sarri take the helm for a second season, club bosses are also mindful that the 60-year-old may prefer to return to his native Italy.

The outside criticism of his approach is said to have taken some toll on Sarri this term, and would in part explain his desire for a return home.

Sarri admitted in the wake of Chelsea’s Europa League triumph that he would be seeking talks with the club, insisting both parties would need to state their full intentions.

“We need to know what the club can do for me, and what I can do better for the club,” said Sarri, in Baku.

“Also the club need to speak to me.”

Former Chelsea midfielder Frank Lampard heads the lengthening queue of those linked with stepping into the west London hot seat should Sarri depart.

The Derby manager remains hugely popular at all levels of the Stamford Bridge set-up, and has already worked with Chelsea loanees Mason Mount and Fikayo Tomori this term with the Rams.

Lampard would be receptive to helping young talent blossom at the Bridge, especially should the club wind up subject to FIFA’s two-window transfer ban. Chelsea can still appeal against that ban with the Court of Arbitration for Sport (CAS).

The unseated Juventus manager Allegri and former France and Paris St Germain boss Laurent Blanc are other names in the frame.