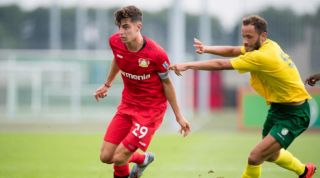 Manchester United are ready to spend £125m on Kai Havertz and Thomas Muller when the transfer window reopens in January, according to reports.

Executive vice-chairman Ed Woodward is set to back Ole Gunnar Solskjaer in the mid-season market as United attempt to improve their squad.

Solskjaer is particularly keen to strengthen in attack following the summer departures of Romelu Lukaku and Alexis Sanchez, both of whom joined Inter.

And United look set to turn to the Bundesliga as they seek to bolster their options going forward.

According to the Daily Mirror, Bayer Leverkusen attacking midfielder Havertz is one of the Red Devils’ leading targets.

United scouts watched the 20-year-old, who is one of the most highly-rated prospects in European football at present, in action against Werder Bremen on Saturday.

The 20-time English champions are also keen to add some experience to their attacking arsenal, and they believe it could be possible to prise Muller away from Bayern Munich.

The forward has fallen out of favour under Nico Kovac, making just four Bundesliga starts so far this season.

Muller has spent his entire career to date at the Allianz Arena but could be tempted by the chance to start afresh in the Premier League.

The 30-year-old has lifted eight league titles and the Champions League at Bayern, and key figures at United believe his winning mentality would rub off well on the current squad.

However, the duo would not come cheap, with estimates suggesting that United have to spend around £125m to land the two Germans.

Havertz would account for most of that combined fee, with Leverkusen valuing the talented youngster at around £85m.

Solskjaer’s side would probably face stiff competition for his signature, though, with a host of European giants also keeping tabs on the midfielder.

United return to action in the Premier League on Sunday, when they take on Norwich at Carrow Road.