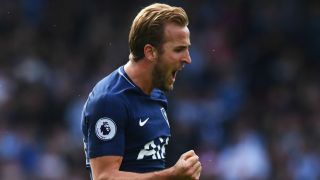 Harry Kane's brace in Tottenham's 4-0 win over Huddersfield Town saw him match the best efforts of Cristiano Ronaldo and Lionel Messi for goals in a calendar month.

The England striker has been in magnificent form in September and continued that in fine style at the John Smith's Stadium as Spurs brushed aside their hosts.

Kane opened the scoring by beating Jonas Lossl at the near post and then scored his 13th of the month for club and country by bending a superb strike into the left-hand corner from the edge of the area.

Thirteen is also the most Ronaldo has managed in a month, the Real Madrid forward doing so in October 2010, while Barcelona superstar Messi matched that number in March 2012, with Kane's rampant run lending credence to the argument that he deserves to be mentioned among the best in world football.