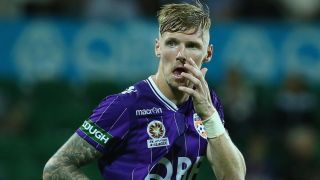 Andy Keogh is set to make his A-League return for Perth Glory after striker Guyon Fernandez's contract was terminated.

Keogh, 29, has returned for a second stint with the Glory, but looked set to have to wait until the 2016-17 season to feature again.

But Glory announced on Thursday that Fernandez had agreed to a mutual termination of his contract after just eight appearances for the club.

Fernandez scored just once for the Glory and was affected by injuries throughout his stay, with his exit freeing up a visa spot for Keogh.

"Perth Glory FC can confirm it is one step closer to paving the way for Irish striker Andy Keogh to make his return to the Hyundai A-League this weekend, pending an international transfer clearance," Glory said in a statement.

"The club has submitted an application to Football Federation Australia to have the 29-year old registered for this Saturday night's clash against Adelaide United at nib Stadium.

"Keogh will be available for selection [subject to the international transfer clearance] following the mutual termination of Dutch striker Guyon Fernandez, which has opened a visa spot for Keogh to fill."

Glory sit ninth in the A-League table, three points outside the finals places, ahead of their meeting with Adelaide on Saturday.

Keogh's return would be a huge boost, with the former Republic of Ireland international having scored 12 A-League goals in 2014-15.