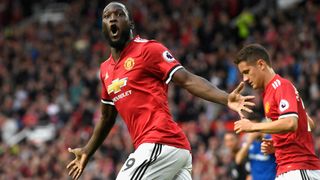 Anti-discrimination group Kick It Out has contacted Manchester United following complaints over an "offensive" chant about striker Romelu Lukaku.

A video has emerged from United's win over Everton on Sunday showing small sections of the home fans singing a song about the Belgium international, which has been judged to contain racist stereotypes.

Kick It Out says it will work with the club and the Football Association (FA) to address the issue and has warned perpetrators to expect punishment.

"Kick It Out is aware of footage of alleged racist chanting by supporters of Manchester United that emerged on Wednesday evening (September 13)," the group said in a statement given to Omnisport.

"The lyrics used in the chant are offensive and discriminatory. Racist stereotypes are never acceptable in football or wider society, irrespective of any intention to show support for a player.

"We have contacted Manchester United regarding the issue and will be working closely with them and the FA to ensure that it is addressed swiftly. If we receive any reports relating to the discriminatory chant, those will be passed on to the governing body and the perpetrators can expect to face punishment."

Kick It Out welcomed Chelsea's decision this month to instruct fans not to sing a song about striker Alvaro Morata, which was deemed to be anti-Semitic in nature.

A popular United blog has already asked fans to refrain from singing the Lukaku chant and has been met with largely supportive responses.

Lukaku has enjoyed a strong start to his United career since signing from Everton for a reported initial fee of £75million, scoring five goals in as many Premier League appearances, including in Sunday's 4-0 win over his old club.