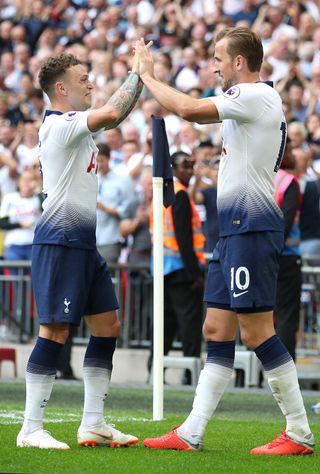 Injured Tottenham striker Harry Kane provided his team-mates with some inspiration at half-time of their Champions League semi-final second leg with Ajax after “going mental”.

Kane, who missed the game with an ankle injury but was in Amsterdam in a cheerleading brief, was unhappy after seeing his side go 2-0 down on the night and 3-0 down on aggregate.

He went into the dressing room at the break and said some words, according to defender Kieran Trippier.

Spurs went out after the break and completed a miraculous recovery as Lucas Moura’s hat-trick earned an away-goals victory which sets up an all-English final with Liverpool in Madrid next month.

Kane, who ran onto the pitch afterwards to join in the celebrations, is hoping to be fit for the final and Trippier hailed the talismanic striker.

“Harry is exceptional for club and country,” said Trippier. “I don’t know the timescale with his injury but obviously we’re all hoping he can be back [for the final] because of his presence.

“Even here, at half-time, he came in going mental at us, because we can do better, which we all knew.”

Kane, who was injured in the quarter-final first-leg against Manchester City last month, said: “It was a disappointing first half and we let them play.

“I went into the dressing room at half-time and we knew it wasn’t good enough.”

Kane now has his sights set on the all-English showdown in the Spanish capital.

“Hopefully. Rehab is going well so far,” he said. “I start straight-line running this week.

“We’ll see. So far so good, so if it carries on as it should I would hope to be (fit). There’s still a few weeks to go.”

Meanwhile, Spurs are assessing an injury to Jan Vertonghen which saw him leave the Johan Cruyff ArenA on crutches and with a protective boot on his foot.

Vertonghen played the 90 minutes against his former club and was fully involved in all celebrations after the game.

The Belgium defender, who played the game with a face mask after his first-leg injury to his nose, is unlikely to be risked against Everton in the final Premier League game of the season on Sunday.