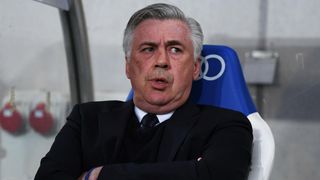 Renato Sanches and Joshua Kimmich will start for Bayern Munich on Saturday as the club prepare to celebrate their Bundesliga title against Darmstadt.

Last weekend's resounding win at Wolfsburg, coupled with closest challengers RB Leipzig slipping up, meant Bayern secured their fifth successive 'Salad Bowl' and coach Carlo Ancelotti will give some of his fringe players the chance to impress against a Darmstadt side whose relegation is likely to be confirmed at the Allianz Arena.

He told a news conference: "Renato and Kimmich will start in midfield on Saturday.

"[Kingsley] Coman has a slight problem with the ankle and is not available - we hope that he can play again in the coming games."

Kimmich has been used sparingly by Ancelotti this season but the former Real Madrid boss is predicting big things from him, as well as France international Coman, over the coming years.

He added: "We are glad we have Kimmich - as a midfielder and as a right-sided defender. In the future, we will use him as a right-back - he should be a very good option.

"Kimmich started the season very well and has learned a lot. I'm sure he'll be even better next season.

"Coman had problems at the beginning and has missed some weeks but he will still be very important to us.

"I have known him since he was a teenager. I took him as a 15-year-old into the first team of Paris Saint-Germain."

Kimmich has been earmarked as Philipp Lahm's long-term successor when the former Germany captain retires at the end of the season alongside midfield veteran Xabi Alonso.

The club know they will have to recruit to replace the duo but Ancelotti says all transfer talk is on hold until the summer.

"This is quite normal. We are preparing for the new season and wanting to get even better," he added.

"I know what we can do to improve and the club has the same opinion as I do."

Manuel Neuer and Javi Martinez will also miss the Darmstadt game but Robert Lewandowski and Thiago are available despite their respective partners giving birth during the week.